I know, I know, kale is SO 2013, but like with most other trends I’m behind the bandwagon…really i’m wondering off in the field because the bandwagon is too hard to keep up with and I’d rather find it on my own; even if it “finding it” was after it was thrown off. I’ve had kale before, but at home, it’s been mostly contained to smoothies or soup. In this dish the kale really worked, and made the dish seem lighter and more healthy (it’s greens!). I used the curly kale variety. I think P and I will be looking at kale a little differently after we had an amazing kale salad last week…it was crazy good for being just a salad. So, here I am picking up kale from the food trends graveyard.

This recipe was slightly adapted from this Cooking Light recipe. I find unless there is a lot of sauce involved orecchiette pasta tends to stick together so I went with conchiglie pasta, though shells would also work. I hate using half the box of pasta (and we like to have leftovers for lunches) so my version uses the full box. 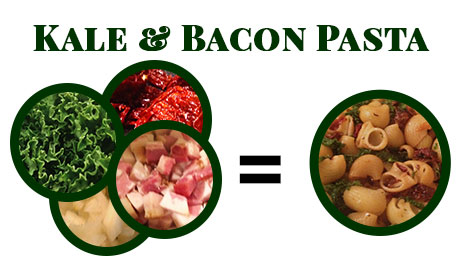 1. Cook pasta in boiling water 8 minutes or until almost tender. Add kale, and cook 2 minutes. Drain in a colander over a bowl, reserving 1/2 cup cooking liquid.
2. Meanwhile, chop up bacon and cook until crisp in large skillet (large enough to hold the cooked pasta and ingredients). Set aside the cooked bacon, reserve 2 tablespoons of bacon grease, and discard the rest. Return skillet to stove set to medium-low and add the bacon grease back in. Add sun-dried tomatoes, crushed red pepper, and garlic to drippings in pan; cook 3 minute, stirring frequently. Add pasta and kale, reserved 1/2 cup cooking liquid, black pepper, and salt to pan; toss to combine, cook for 3 more minutes. Top pasta with 2 ounces of cheese, and drizzle evenly with lemon juice. Garnish with bacon and remaining cheese in individual bowls.

Tuscan White Bean Soup: This recipe needs way more beans, I would say maybe two more cans worth. We utilized bacon instead of pancetta so we could use the full package this week we bought for the pasta dish. This was ok the next day but separated overnight, so it did not seem as appealing.

Veggie Rice Bowl: This week we used brown rice instead of the noodles, and I have to say I think it works better. We could not find the roasted red chile paste this grocery trip so we just used a bit more sriracha and it turned out fine.

Blonde Brownies with Chocolate Chips and Marcona Almonds: these were a bit on the sweet side for me, I was not wowed like I normally am by Joy’s recipes but P liked them 🙂