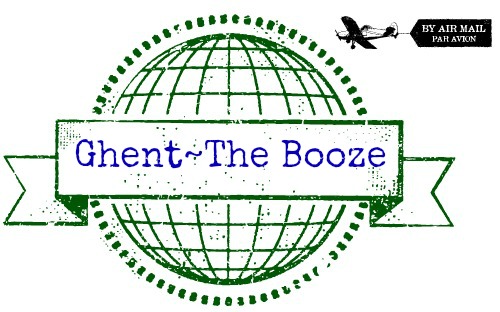 While Ghent may seem small and a bit quaint in comparison to Brussels or Antwerp, it makes up for its lack of size in character. There is a bar on almost every corner, with none coming across as touristy. I think the mix of locals and tourists at most establishments is one of the reasons I was so taken with Ghent. While there were certainly plenty of tourists in the town, you always could spot locals at the bars and the staff never treated you like a tourist. As you will see in some of the pictures below, most of the establishments had certain quirky elements that added a to their authentic feel. They didn’t feel white washed or changed to attract visitors.

Gruut Brewery
Let’s start with Grutt brewery, which sits right on one of the canals in Ghent…talk about a beautiful spot. The space was huge and quirky. It had a very mismatched collection of furniture almost like someone raided their parents basements to collect tables, chairs and couches. As you will see in the picture below, there is a stream running through the middle of the space. And, yes that is a urinals and yes I insisted on a photo. How did I know about these? Well, when you walk to the ladies room you pass right by these for the world to see (no door). And no, I did not loiter in the men’s door and snap photos, I had P do it (that seemed more appropriate).

The beer was good, but not that notable. I could tell they rely on the same or a very similar strain of yeast for all of their beers. They did have a nice variety of styles to choose from and offered tasting flights, which I love. Here is us enjoying a flight, and while P looks like he might have had a few already, this was actually our first drinking stop of the day 🙂 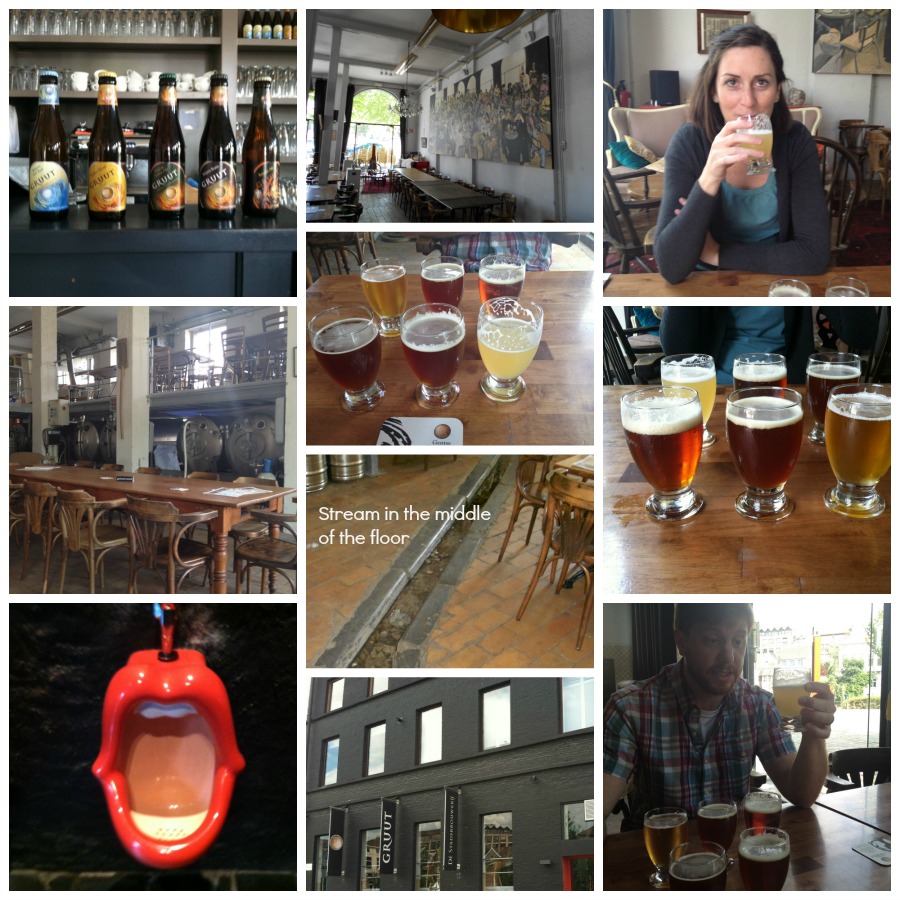 t’dreupelkot
Belgium is known for their genever or jenever, which is a liquor from juniper berries (similar to gin but not in taste). We had read about this place prior to our visit and the owner brews his own genever, so we knew this was the place to try it. It is a very small, very funky little bar. We tried both the old genever and the new genever. I liked the old much better, it was much smoother, whereas the young was rougher and strong tasting…the kind of liquor you feel you could use to breathe fire. The owner had a huge variety of flavors but we stuck with just the two, as we had other drinking and eating to do that evening 🙂 And, why yes that is a very ratty looking lounge chair right there in the bar…it actual has plywood under the cushion.

Cafe ‘t Galgenhuisje
This bar was charming…just look at it. Very cozy with a great outdoor space, in a building built in 1776. It is the oldest “continuing run bar” in Ghent. The bartender was funny and the other patrons friendly. It was a mix crowd of regulars and tourists, with 80’s rock playing in the background. Stop in for a beer just for the experience and to get a peek at the interior. 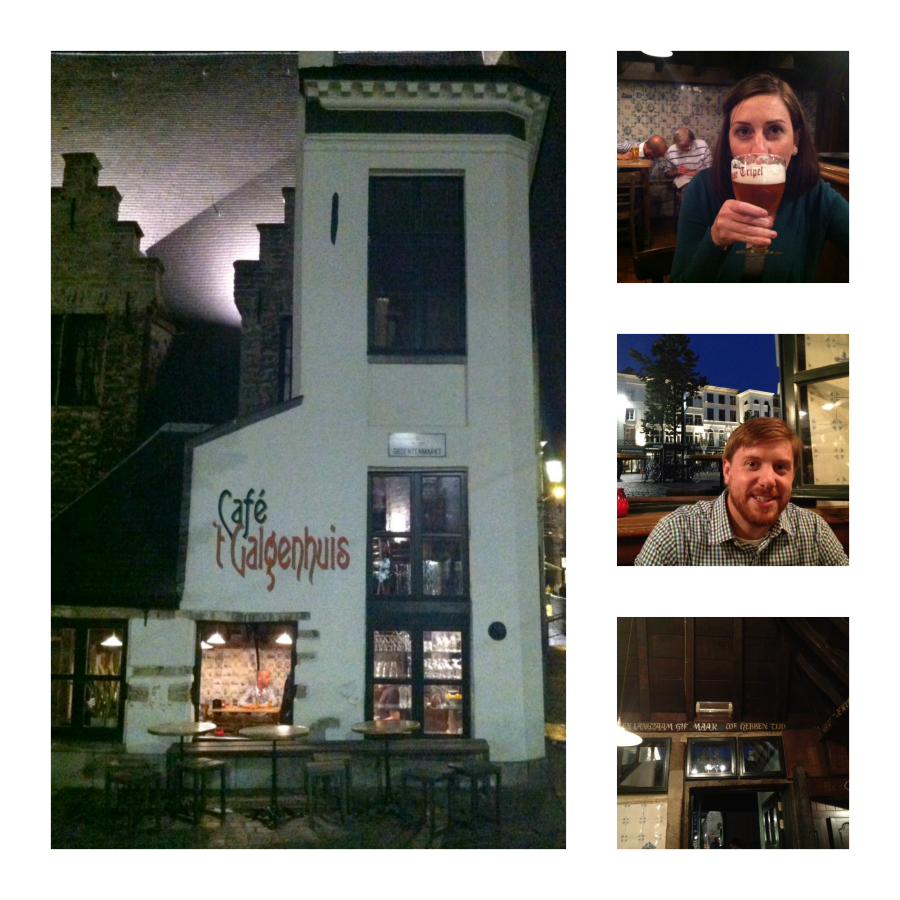 De dulle griet
This was the first bar we visited in Belgium, and I was impressed. The beer menu was overwhelming (in a good way) and I got a free beer…which was a great start to our Belgium adventure. While the plate of salami and cheese looks very standard and not very exciting, it was SO good. Maybe it was the atmosphere, maybe it was because I was on the verge of breakdown hungry, or maybe it was just really, really good. It came with celery salt, and I loved it.  Just typing this makes me want salami and cheese (as a note the salami was more like summer sausage). 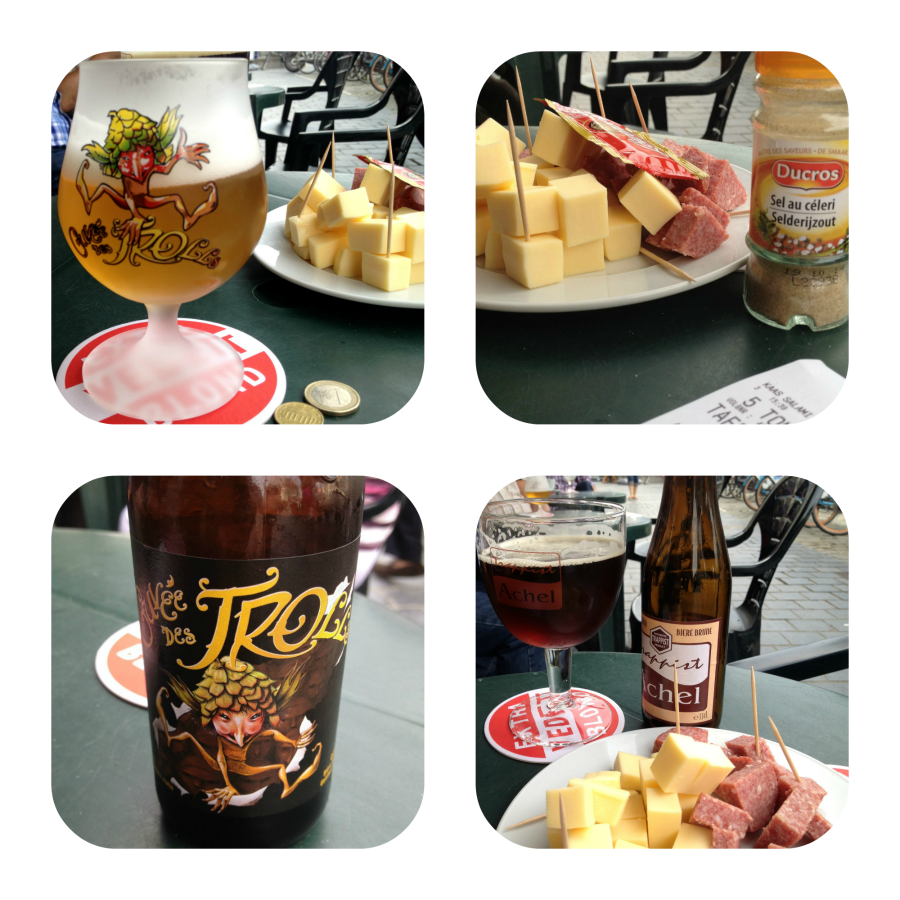 Visited but Not Pictured:

Trappistenhuis: Again book not menu selection of beers and awesome service. The patrons were also very friendly and very local. We went for a pre-dinner drink before our dinner at De Vitrine, which I will share next week.