This past weekend, we had our official release of Philosophy Brewing’s Bourbonator. As you may have gleaned from one or two of my posts (or any post under travel really), P and I are into beer. We not only, enjoy seeking out new beers and visiting breweries, but P also makes beer at home. Our home brewery is called Philosophy Brewing and we even have a logo. 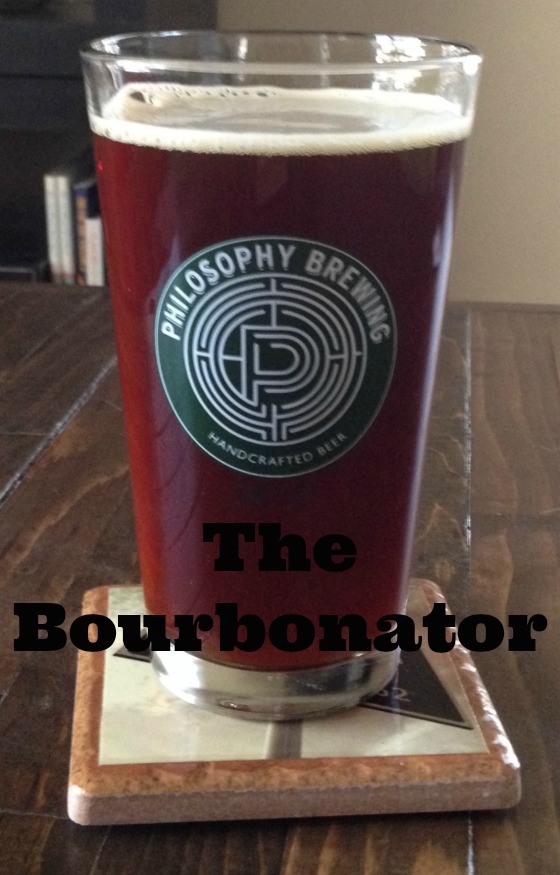 Homebrewing has been a hobby of P’s for the past five-years and we have a lot of fun with it. We have three beers on draft at any given time and like to have friends over to help us make room for new creations. Sometimes friends even help with the creation, which was the case with the Bourbonator. So, enters the legend of the Bourbonator:

Once upon a time, way back in 2013, a golden maiden and her bear of a husband took a little journey to the state of the bluegrass to search for the water with fire. They searched high and low, and had great adventures and discovered many varieties of this special water all along the trail holding it’s very name. They brought many bottles back with them to enjoy and share with their friends in the sticky heel state. They also brought back pieces of the barrels the fire water is created in. The bear of a husband thought and thought, what would be the best use of this special wood? I could use it to smoke meat, but that would only feed me for a day and I want more for my hard journey. So, the bear conferred with his friend from the fat tobacco stick establishment and it was decided that the fiery-headed village brewer would have the answer. Thus was the beginning of the Bourbonator.

The Bourbonator is a Dopplebock aged on Maker’s Mark soaked bourbon barrel staves. Since a few of our friends contributed to the creation of the Bourbonator, it was only fitting to have a party in honor of it’s release. I think it is safe to say, a good time was had by all 🙂

Bourbon makes me think steakhouse, cigars, leather, which somehow translates to me as bacon. So, below is our very bacon heavy menu:

Freshly-Ground Burgers prepared by the golden maiden and her bear of a husband (the special meat blend included bacon!!)

We never lack for great food with our group of friends 🙂

Sorry guys, I don’t have much to share here, but the whole reason I do these Sunday posts is to share what we REALLY eat. Since we had the party, we had quite a lot of food leftover, so basically we ate that for most of the week:

Sunday-leftovers and burgers cooked for dinner (as our dear friends made us a couple extra)
Monday-bbq bacon wrapped shrimp, leftover potato salad and wedge salad (I went and picked up the shrimp after work and we had a package of bacon we did not use)
Tuesday- Bacon-Jam and Ashe County Pepper Jack Cheese  Quesadilla (using leftover tortillas from last week)
Wednesday-Out
Thursday- Fried eggs over rice with bacon, cheese, and green onions
Friday-Melina’s Country Ham & Collards Ravioli, with Tabasco butter and a simple spring salad.

I’m actually very proud of how much food we were able to not waste, but next week a major meat and cheese detox is needed…who are we kidding cheese will most likely make it’s way into next week’s menu but maybe just a little less of it 😉