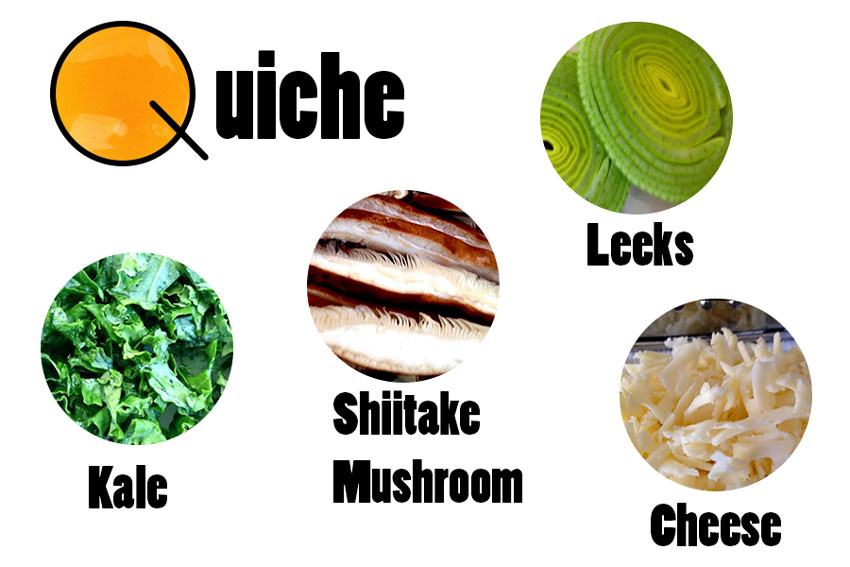 I used Chapel Hill Creamery Hickory Grove Cheese but any kind of white salty cheese will do. For the crust I used Immaculate Baking Pie Crust.

Preheat oven to 375 F and bake crust according to package directions or see the Martha Stewart recipe on how to prepare your homemade crust.

Meanwhile, in a large skillet, melt butter over medium-high. Add leeks cook 3 minutes, add garlic and shiitake mushrooms, season with salt and pepper cook 4 to 5 minutes (until mushrooms are soft), add kale and cook until just wilted about 2 to 3 minutes. Set aside and let cool slightly (don’t add it hot but warm is fine). In a medium bowl, whisk together eggs and milk, season with salt and pepper. Mix cheese into mushroom mixture, place mixture into pie crust distributing as evenly as possible, pour egg mixture over mushroom mixture, you may need to stir a little to distribute filling better. Place the pie pan onto a baking sheet, cover crust edges with aluminum foil, and place into 375 F oven. Bake until center of quiche is just set, 40 to 45 minutes. If your crust is not browned to your liking remove aluminum foil 5-10 minutes before quiche is finished. Serve warm or at room temperature.

The Rest of the Week