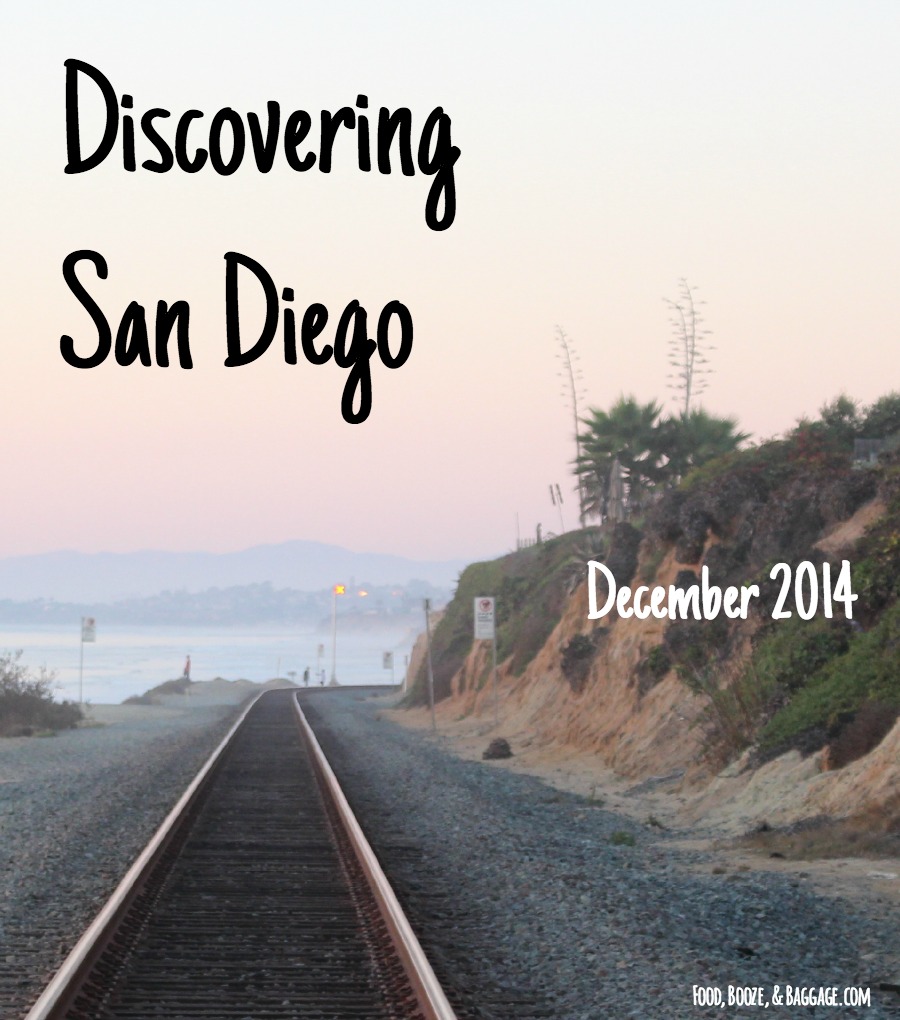 December marks our third full month in San Diego. Honestly, I feel like we have been on an extended vacation the first couple of months. Are you sitting down? I may be getting a little tired of eating out. I think January’s post will be a bit shorter 🙂 The highlight of our dining experience in December was our return trip to Juniper and Ivy and this happened….

Awesome night out at #juniperandivy!!! We not only got to meet chef Blais, but he gave us a signed cookbook!! The food was just as good as our first visit. #disoveringsandiego #sandiegofood #sandiego

I was very over the moon with our night out and getting to meet the chef. He was so nice…he even offered the picture, I did not ask! Of course the food was just as good as our first visit. 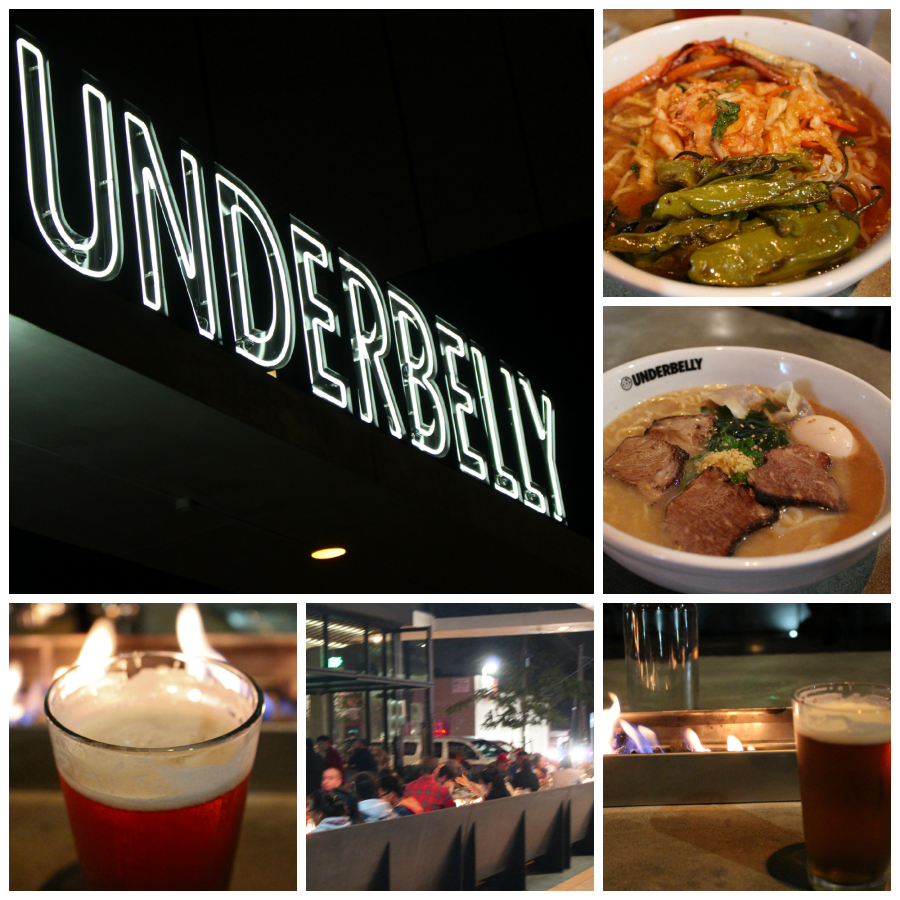 Finally, I got to try a ramen place!! Underbelly has a remarkable space, the design is very cool, with seating mostly outdoors. This is an order at the counter and find a seat place. Both P and I got ramen, I got the charred vegetable and kimchi ramen and P got the underbelly version. Both were good, but we both liked the vegetable one best, it had a greater depth of flavor. One thing to note is that they do not serve spoons with their ramen, only chopsticks which I was not a huge fan of…broth is my favorite part! I did drink it out of the bowl, but I like having a spoon as an option. Would it be weird if I started carrying a spoon in my purse? 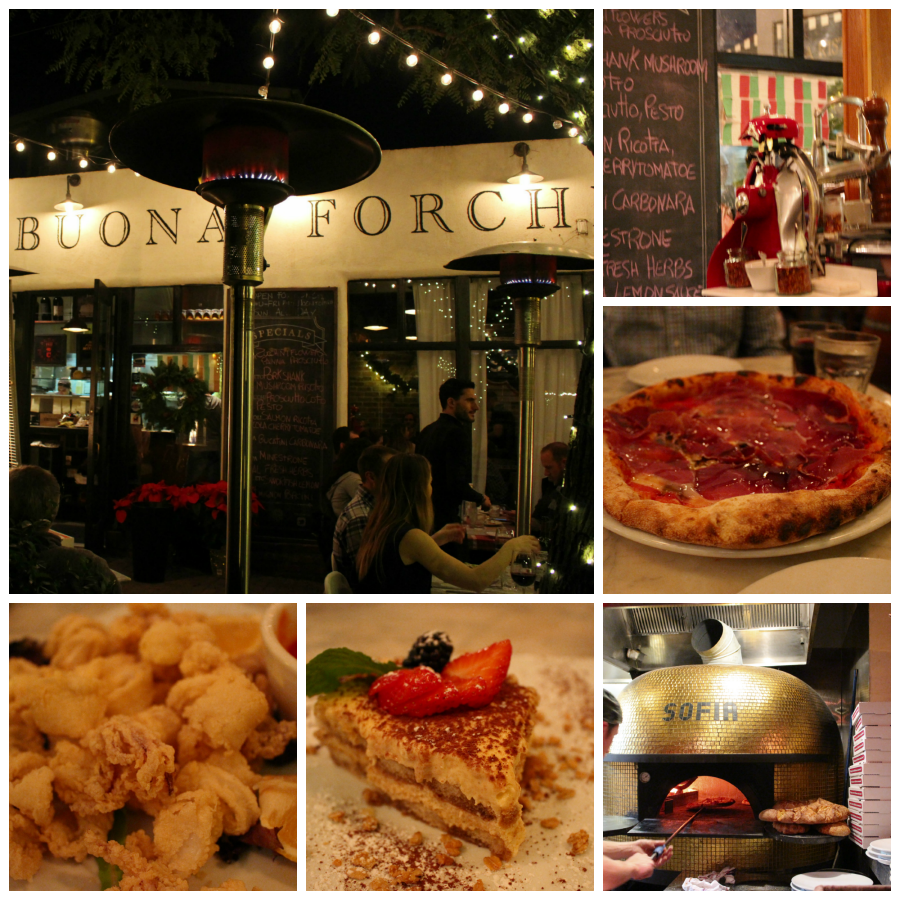 This place was recommended from one of P’s co-workers. It was quite good, and we would go back. We split a pizza and tried the calamari. I was not impressed at all with the calamari but the pizza was REALLY good. A table near us got the calzone and it looked so good and was huge!! It was so big the table right beside us got up and cancelled the other half of their order. We want to go back and try the calzone and one of their pasta dishes. Tons of pizza choices but limited pasta dishes and salads. They also had a very nice and ample outdoor area, though we ate inside since it was on the brisk side the night we went. Get there earlier to avoid a wait, we went around 6 and by 7 they were full (outside too). 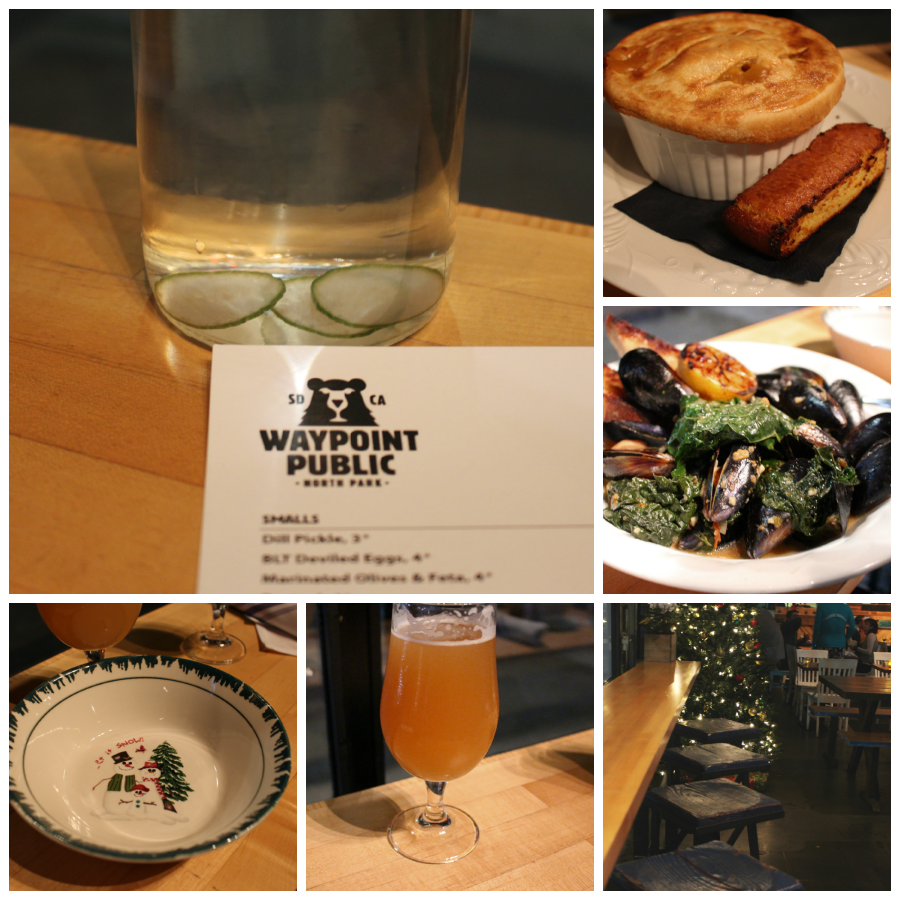 I love Waypoint’s space with the big windows and bar seating all around. P and I had tried a few items here during the Bottle Share event and their dish at the Beer Garden event was one of our favorites. We had been wanting to try them for dinner for a while. I thought our dinner was good, but nothing I would insist on ordering again. I’m sure we will go back, but I may stick with their appetizers and small plates. I had the crab pot pie, it was perfect for the chilly night. Lots of crab meat but lacked seasoning and depth of flavor. Also, the veggies were in such huge chunks it was a bit hard to eat. I don’t want to have to bite through half a carrot or a huge wedge of potato. P had the mussels which were good, but not to our high standards. The broth was better than most, however the mussels did not pick up very much on the flavor. The dish was described as mussels and pork belly, the pork belly was no where to be seen in the dish or broth. An enjoyable evening with good service, even though the dishes didn’t quite live up to expectations. 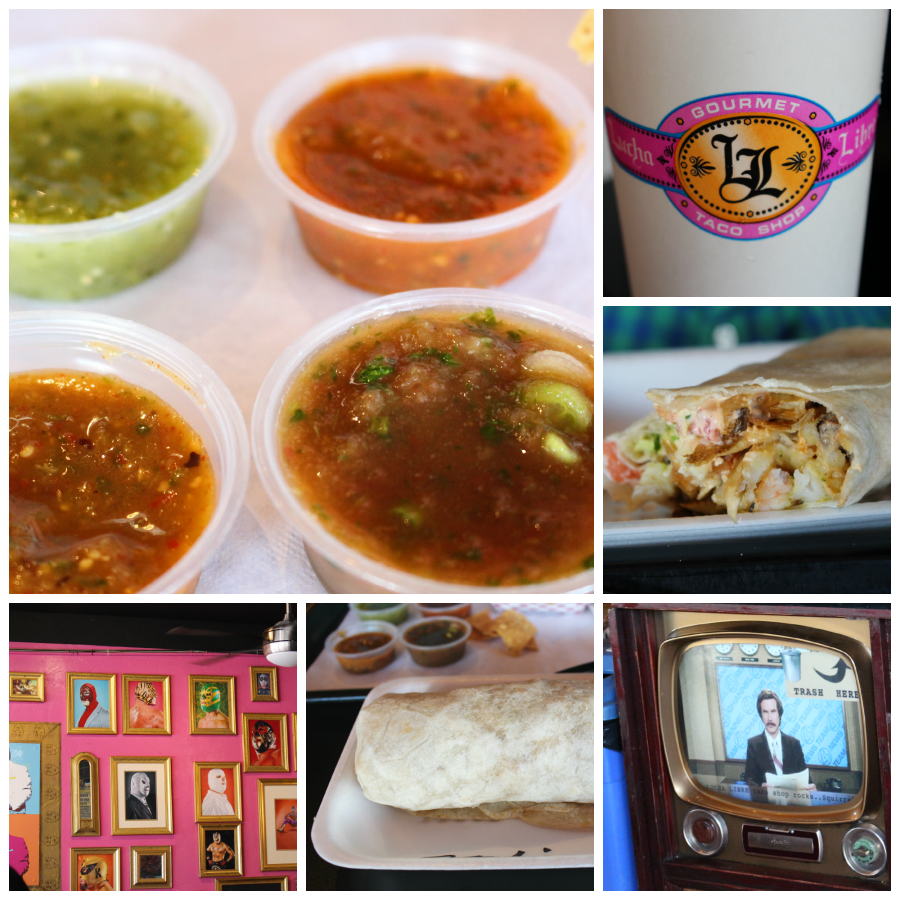 I don’t get the hype. The burritos were good but nothing spectacular. I’m not putting it under bad, it tasted fine, just not worth the wait. We went on a Friday around 1:30 and while the line moved quickly (we were in and out under an hour), it was still a wait. The place is crowded and the not all that clean, it’s not a relaxing meal. I had the California burrito with chicken and P had the California Surfer, both were fine but under-seasoned. Their salsa bar had a lot of choices and what we tried was good, though no labeling so I couldn’t tell you what we had. If we were to go back, I would skip the line, call in take-out and hop down to Acoustic Ales to enjoy it there. It would be a much better environment to eat your burrito in and you can skip the wait. 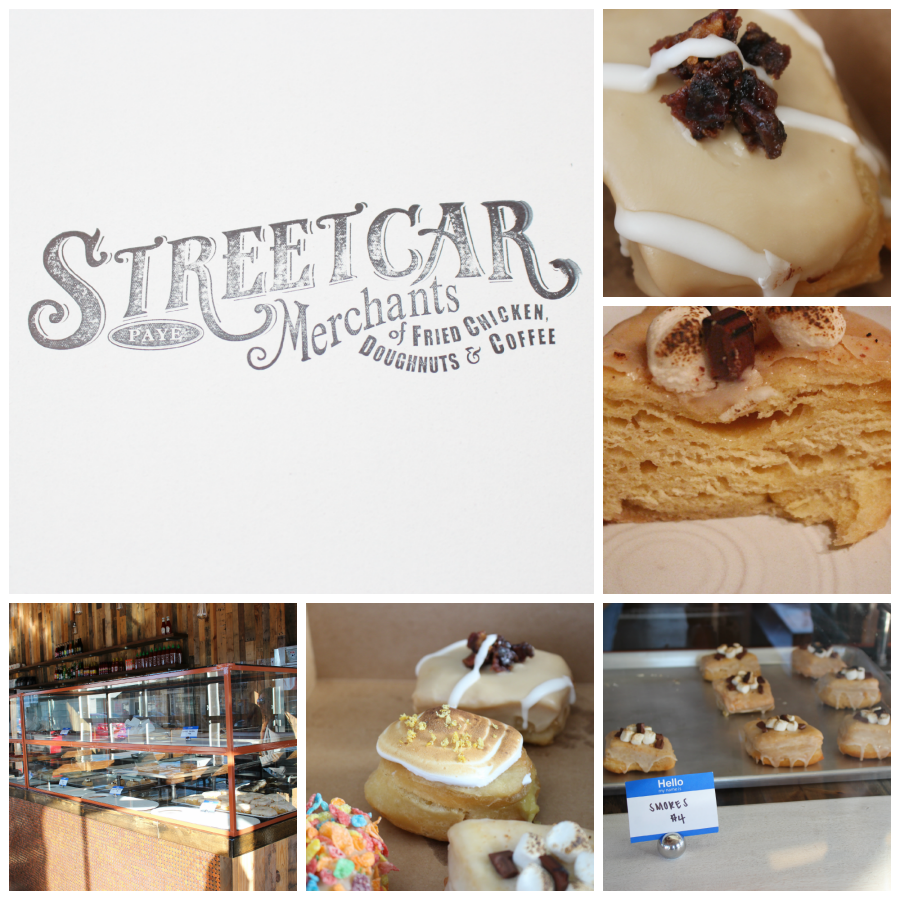 This is a newly opened spot, hosting donuts and fried chicken…they had me at donuts. P and I picked up a few donuts one Friday morning to sample. They offer a nice variety of flavors but overall I was a bit disappointed. They are good, but just not to my taste, I feel like they could use a little more umph. The donuts themselves are really thick, almost like biscuits. They need filling. Only one out of the four we tried had filling, the lemoncillo one. The s’more and the maple bacon were disappointing because the only flavor you got was from the small amount of topping. P and I did try the chicken, the Nashville hot, but I neglected to take pictures. It was so good, but it was no joke spicy…lip tingling spicy. We will certainly be back to try the not so spicy version. It was cooked exceptional well, very juicy with a crispy outside…just the way fried chicken should be. They utilize chicken from a California supplier that is Step 3 in animal welfare, it’s nice they are transparent about where their chicken comes from. The service is also VERY friendly. They should consider adding a fried chicken and donut sandwich, those would sell like gangbusters….especially since their donuts are so dense. It is a winning idea :) 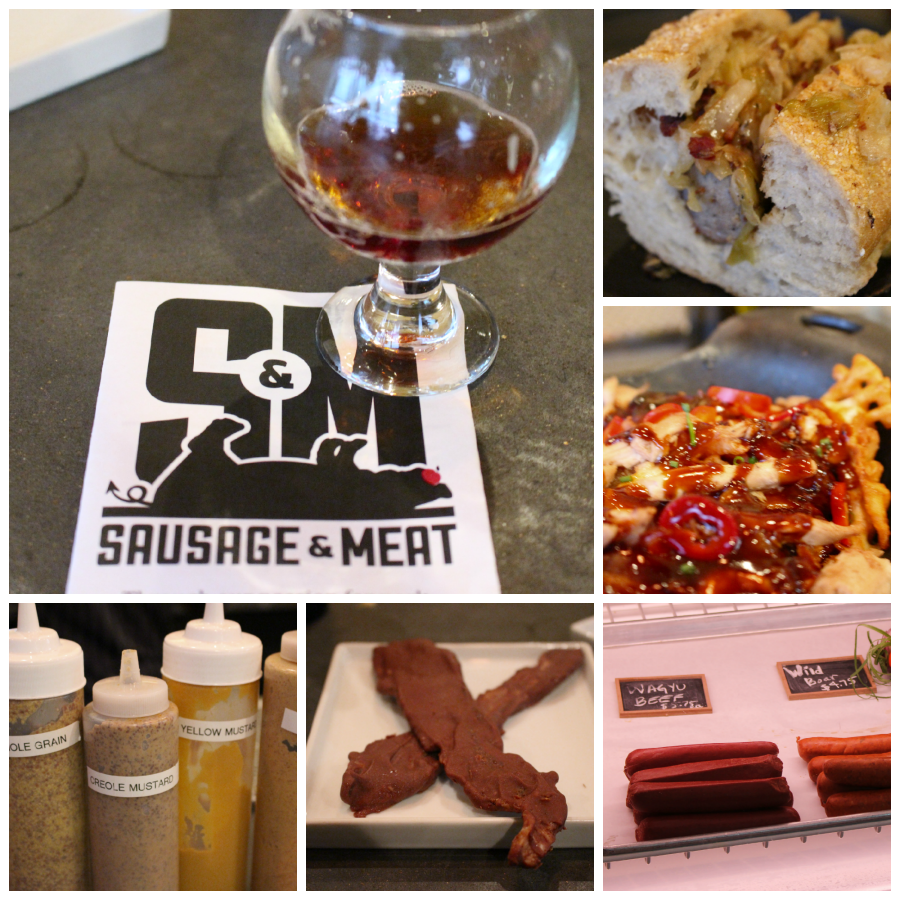 This is a newly opened restaurant in San Diego that is near our house. I liked it, but didn’t love it. We split a sausage sandwich and the poutine. The poutine was the star of the meal, though it was more like loaded fries than poutine. It had more of a glaze (which was delicious) not gravy, labeling it poutine is a bit off. They used waffle fries which were great. I loved this dish. The sandwich was ok. The sausage itself was good, but the bun overwhelmed the sausage completely, they need to find different bread. I think next time we may just try the sausage plate instead. I was impressed that they offered four mustard choices. The deli and creole were my favorites. They also sell their sausages uncooked to grill at home, and I could 100% see us doing that. We also tried the chocolate covered bacon for dessert and I was not a fan, so much so that I only had a few bits. It was not good, the chocolate was gritty and the bacon was not crispy or  salty…I wouldn’t give that dish a second chance. Overall, a good experience and good food (minus the chocolate bacon). As a side note, if you sit at the bar it is full service so you don’t have to wait in line to order. 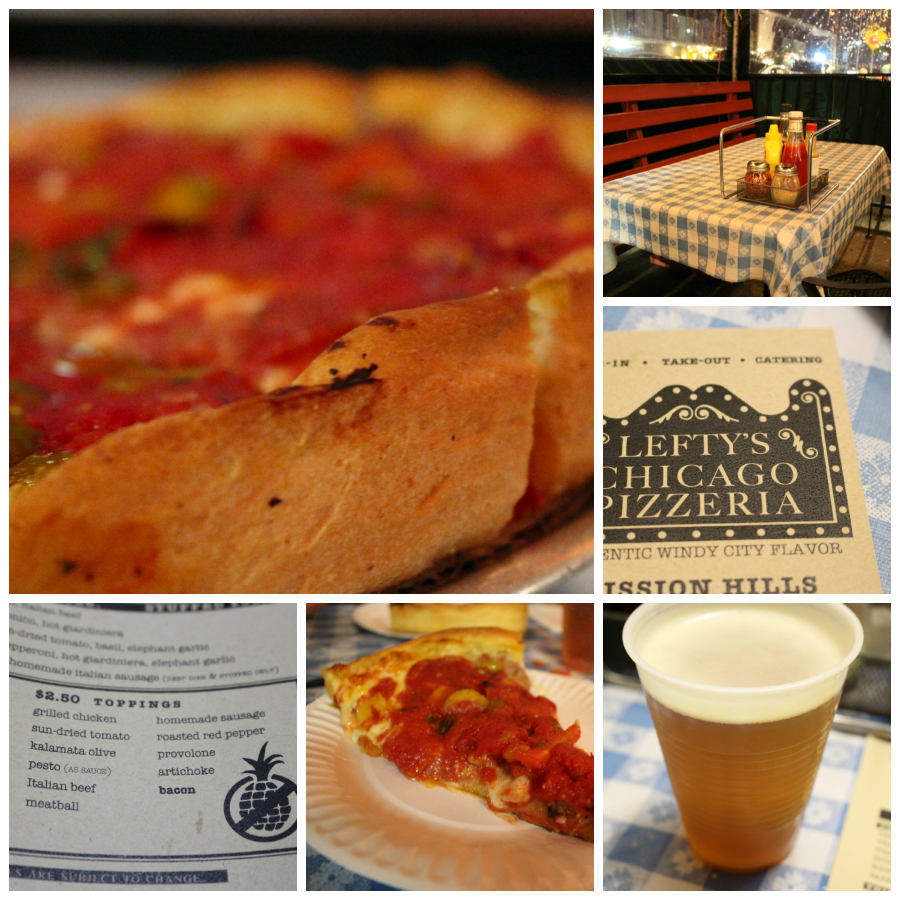 Lefty’s shows up on a lot of lists as a good place for pizza and hot dogs. They style themselves as Chicago style in both, but also offer thin crust pizza. It was good, but I don’t know if I would go for the deep dish again. The one we got was uber garliky and I wanted more cheese.

The Patio on Goldfinch 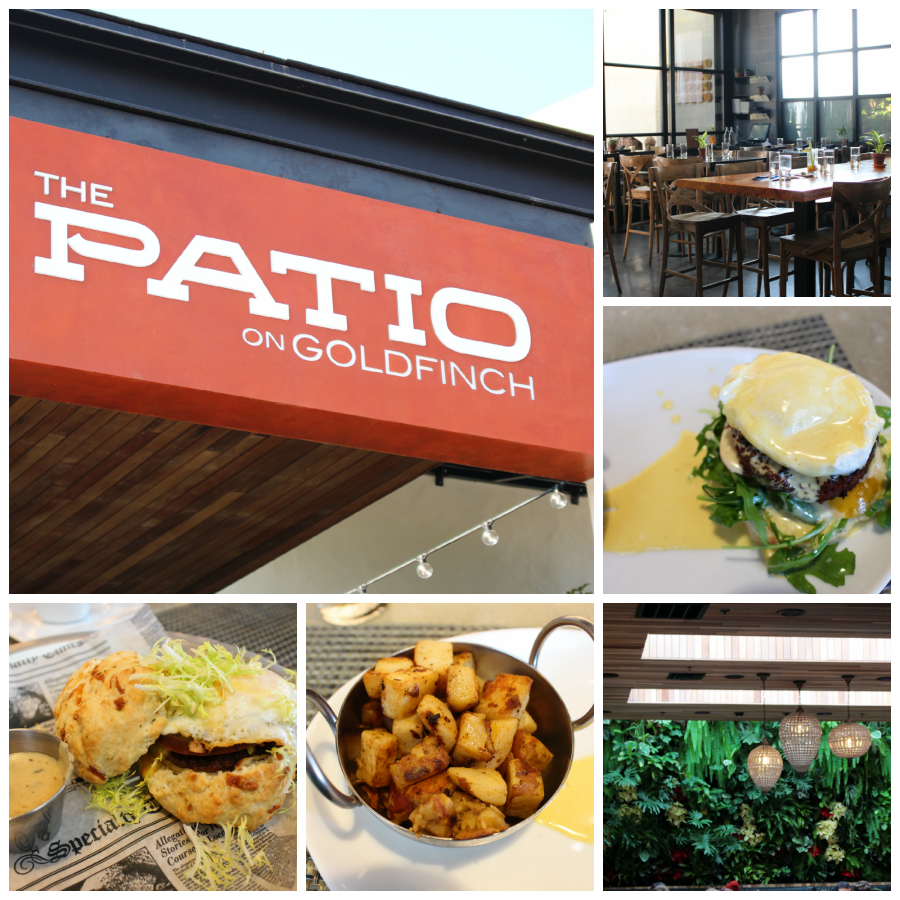 Such a cute spot! The food was really good too, we went for brunch and liked both the dishes we tried. They had a really interesting cocktail menu as well, but we were not in the mood for a cocktail that morning. I also liked that their portion size was reasonable, unlike most of San Diego restaurants that give you enough food for two.

Urban Solace Yes, I’ve talked about this place before, and no I don’t include every single place we visit in these posts…otherwise you would see a lot more pictures of BLAH and Tiger!Tiger! 🙂 However, I had to include our brunch at Urban Solace because I had the breakfast mac and cheese and it was amazing! I feel that it would be just flat out wrong not to share this with you! If you follow me on Instagram you might have seen it already. If you are not following me, you should be because you don’t want to miss out on world changing things like breakfast mac and cheese 🙂 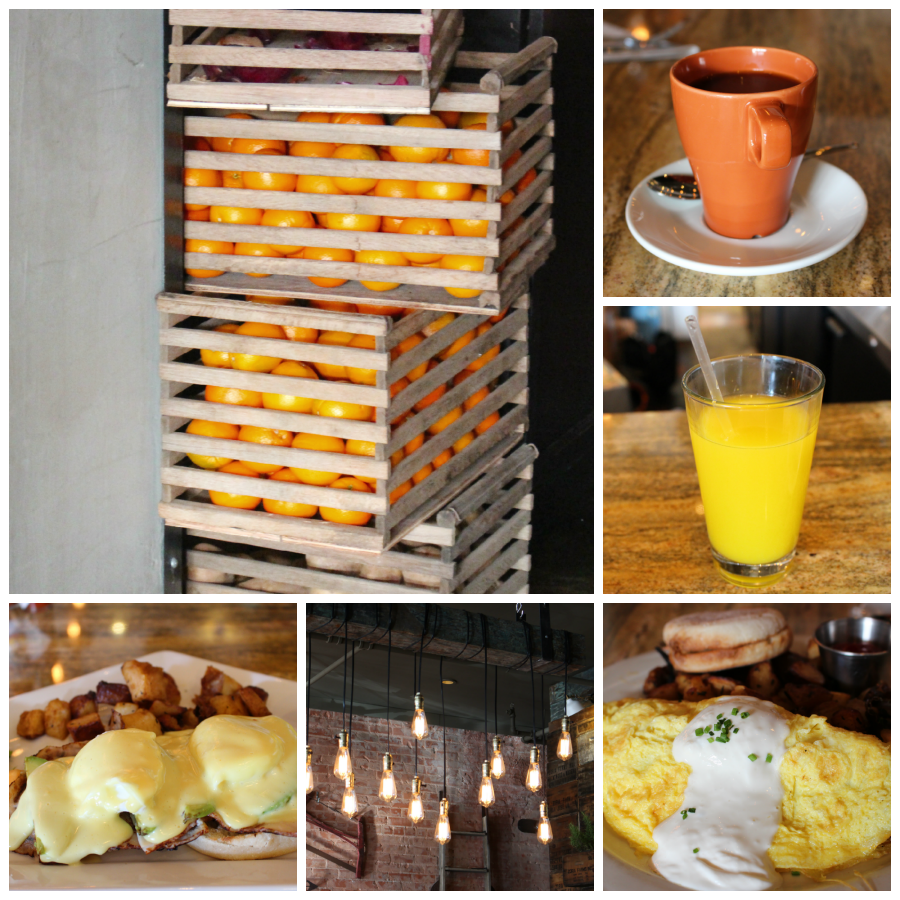 This was such a good brunch. The benedict and the omelet were both amazing, and you could really taste the quality of the ingredients. We will certainly be going back to try dinner.

Not a fan. I hated the icing, you could tell it was oil based and that just turned me off. The space was neat though and they had a good variety, I just wasn’t wowed. I have high expectations when it comes to my cupcakes 🙂

We went to Hess on our house hunting trip, and I was not overly impressed with their beers. I’m glad we gave them a second chance, this time around I enjoyed their beers a lot more. I’m a bit obsessed with their Fig Saison now. The space is large with plenty of seating. Both times we have went there has been quite a collection of children tagging along, which for me is not a plus.

Skip the brewery and find their beers at the store. It did not have a good feel to the bar and they were WAY under-staff. We went on a Saturday, in the afternoon so not an odd time at all. They did not have their act together at all and were out of about half the beers listed. The beer itself was fine, but I wasn’t wowed.

Cool space and friendly service. The beer was good but not amazing. We had actually had their beer at Urban Solace and the same version at the brewery tasted quite different. Overall, good and a neat space to visit. 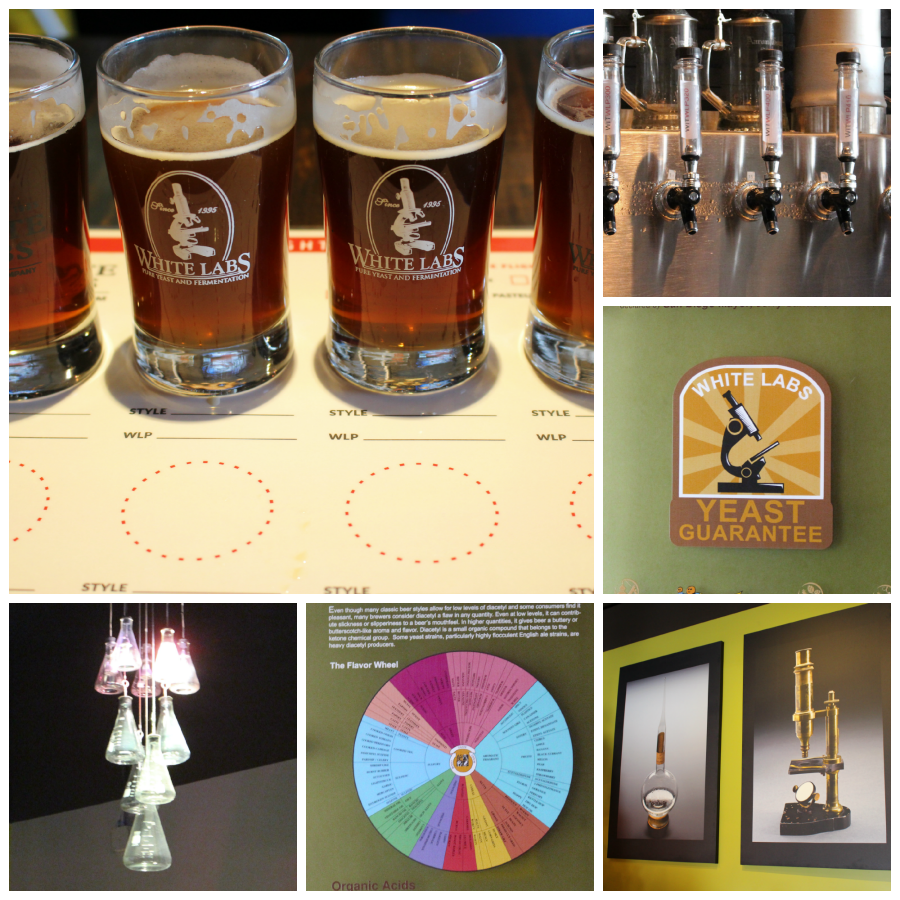 This was an awesome experience! White labs produces yeast for breweries and this is where they produce (grow?) the yeast. They also have a tasting room, where they feature a beer style with four to five different yeast variations.  I loved getting to try how the yeast changed the flavors of the beer style. It really was such a cool tasting and unique experience. We went on Christmas Eve day and it was not crowded at all, we had read it can get busy. Our bartender was so nice. She even let us join on a little tour that they gave to a visiting brewer. I of course had to try the saison flight and I also tried their featured rauchbier flight. I was so impressed with how well the yeast flavors showed up in both flights. If you are interested in how beer is made and the influences of yeast, this is a must visit. 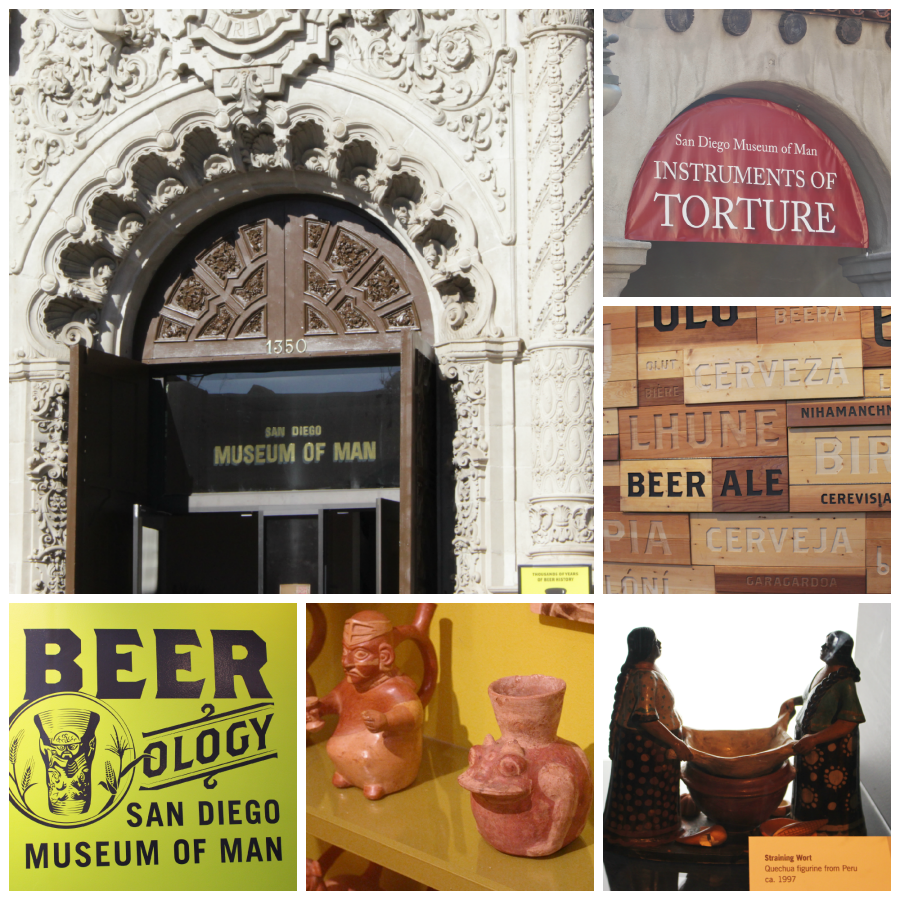 We made it to the Museum of Man this month in Balboa Park. It was ok, some of it was interesting and some of it was a bit disappointing. If you were here on vacation, I would say skip it. If you do go, they keep it VERY cold in some of the exhibits, even P was freezing. Take a sweater or jacket! I was dressed in jeans and a sweater! You can only take pictures in some parts of the museum.

That covers our December. Make sure to check out my previous months for more of our San Diego adventures. 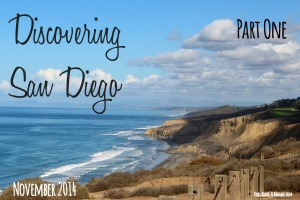 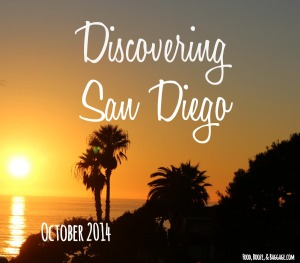 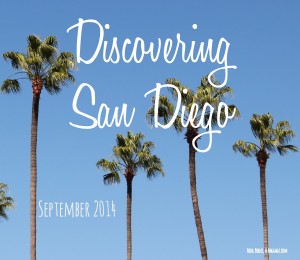 Linking up with Sunday Traveler.