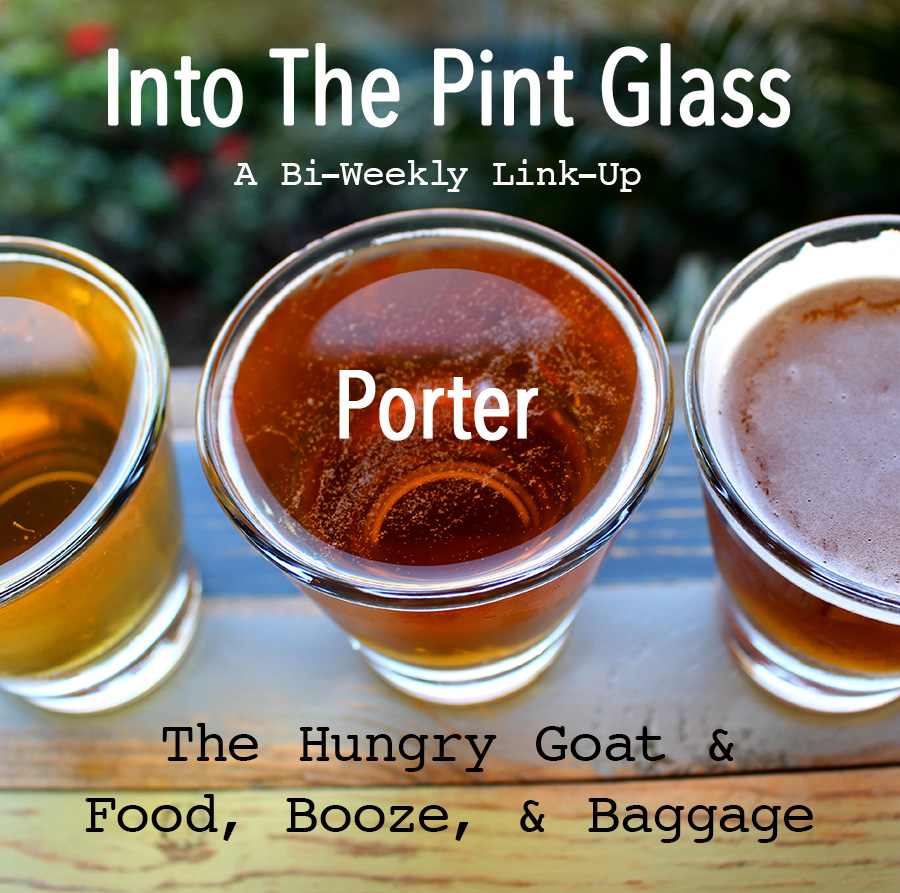 Welcome back to Into The Pint Glass, today we are taking it back to the dark, roasty side with Porters. Porters like stouts fall into the, I need a taste before I commit to the full glass category. Katie prepared today’s beertory to give you a little insight into the world of porters.

What do you think of when you hear “malt?” Or “roasted?” How about “robust?”

Those may not be words you use in your every vocabulary but these should be what come to your taste buds when you sip on a Porter.

The history of porter is a little bit controversial in the beer world all signs seems to point to a London brewer in the early 1700s. The beer was referred to as Entire or Three Threads — it was a mix of three equal parts of different styles of beer: an old ale, a new ale and a weak ale . Because porters take so long to age, large breweries, such as Guinness*, were the only ones who could brew porters. Pubs were unable to do so.

So what should you be looking for when you try a sip of porter? Well, remember when we talked about roasted and malt-y? Just keep thinking those words. The maltiness in a porter should range from mild to moderate roast, and there is usually a big chocolate characteristic. A true porter will not have that flavor added in. There won’t be a syrup or cocoa beans added during fermentation. A true porter will have a chocolate characteristic because of the malts.

*Yes, Guinness is technically a Stout. But don’t forget that when we talked about Stouts, they used to be referred to as Stout Porters and didn’t drop the Porter until a little bit later, after Guinness was founded.

Katie was a bad little goat, and didn’t drink all her beer yet!! You can check back in with her next week to see what she sampled! For now, you are stuck with just me and any other brave souls who link-up, so let’s dive in. 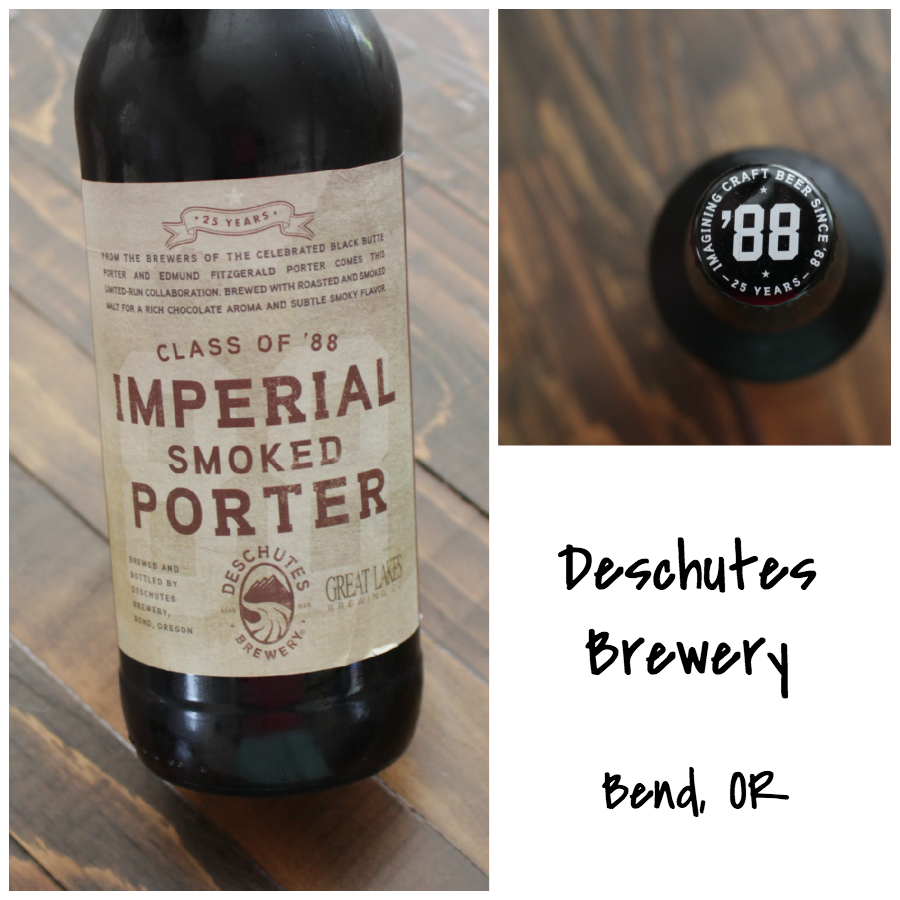 The Class of 88 is a collaboration beer with Great Lakes Brewing Company, which means that brewers from both breweries worked together to come up the recipe. It was brewed and bottled at Deschutes Brewery. Sometimes when breweries do collaboration beers, they each will brew that recipe at their brewery and each release their own edition. I’m usually weary of smoked beers, sometimes they are amazing, and sometimes they are so over smoked it’s like you are on the wrong side of a campfire. Luckily Class of 88 was on the amazing end…yay!! It is 9.1% ABV, but you couldn’t tell when drinking it. Overall, a super well balanced porter that is very drinkable.

Smell: leathery, smokey, slight hint of caramel and tobacco
Taste: Clean on the front-end while finishing with a slight smokey roasty bitterness. The smokey taste is evident without overwhelming the palate. A touch of almost leathery bitterness comes through. Mouthfeel is medium to light, not heavy in taste or mouthfeel, nice dry finish. Very drinkable, complex beer. This was my favorite out of the two. 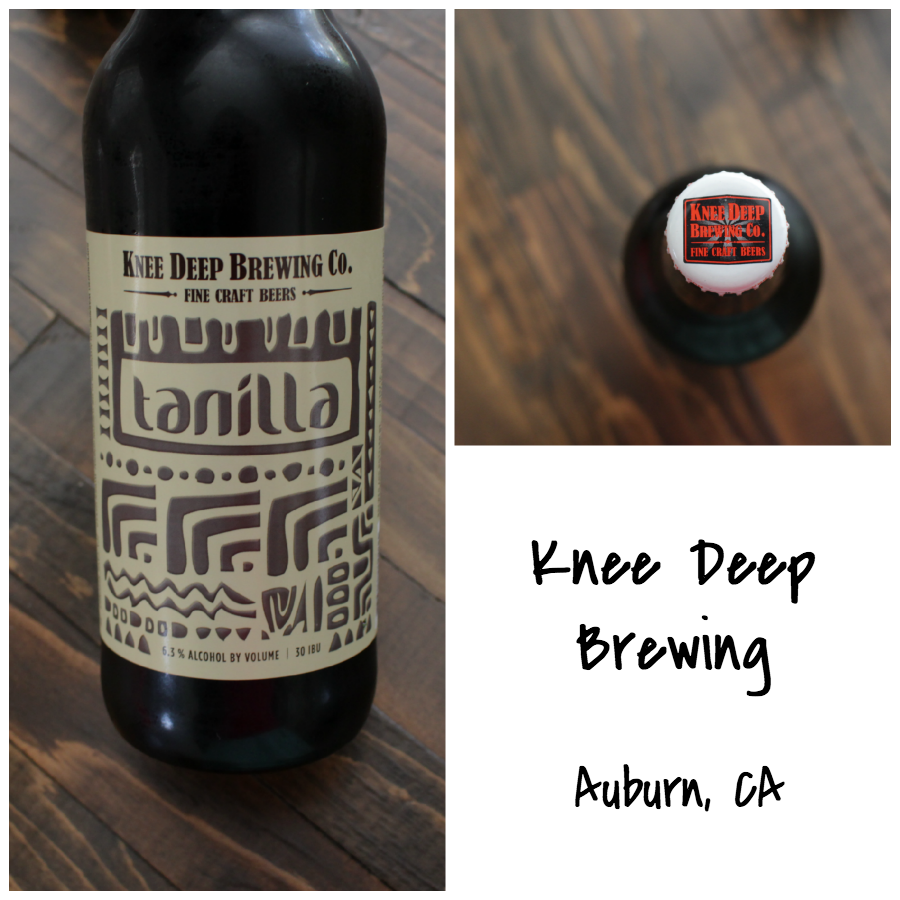 This was the first Knee Deep beer I have tried.  I’m in love with the Willy Vanilly from Alpine, it’s like drinking cream soda (though it is not a porter), so I thought I would give another vanilla beer a try 🙂 The ABV for this one was 6.3%. This was not a winner for me.

Smell: Very vanilla, almost like vanilla extract with a hint of chocolate sweetness.
Taste: Vanilla in the front-end, finishes earthy.  I wish it finished creamy. I think they might have over-hopped this beer, the IBU was 30, which is unusual for a porter. The hop flavor cuts through the finish, bringing in the earthy bitter flavor. Light to medium mouthfeel, on the lighter side, I feel a heavier mouthfeel would have matched with the sweetness of the vanilla better. However, the really weird note on this beer is that P’s glass tasted different, it had heavier mouthfeel and more vanilla flavor. I have never encountered this with a bottle of beer. I did pour mine first from the 220z bottled as I do not like yeast sediment in my beer, and P doesn’t mind as much. There was 100% no water or anything else in my glass before pouring and there wasn’t much or any sediment in the bottle. We assume there was some addition to the beer that settled. Never have I had this happen before, very strange, but there was a marked mouthfeel and flavor difference between our two glasses. Either way not a huge fan of this one.

So for me, one amazing porter, one not so good porter….how did your dive into the porter pint glass turn out? Link-up below!!

The next Into The Pint Glass is Dark Lagers on April 30th. Dark Lagers are a bit of a less known/popular beer style, so I wanted to give you a little more information to help you locate your pint. You can look for labels that say dark lager, black beer, Munich Dunkel (or just Dunkel), or Schwarzbier. Some common brand examples include Full Sail Session Black, Samuel Adams Black Lager, and Uinta Baba Black Lager. Good luck beer hunting! 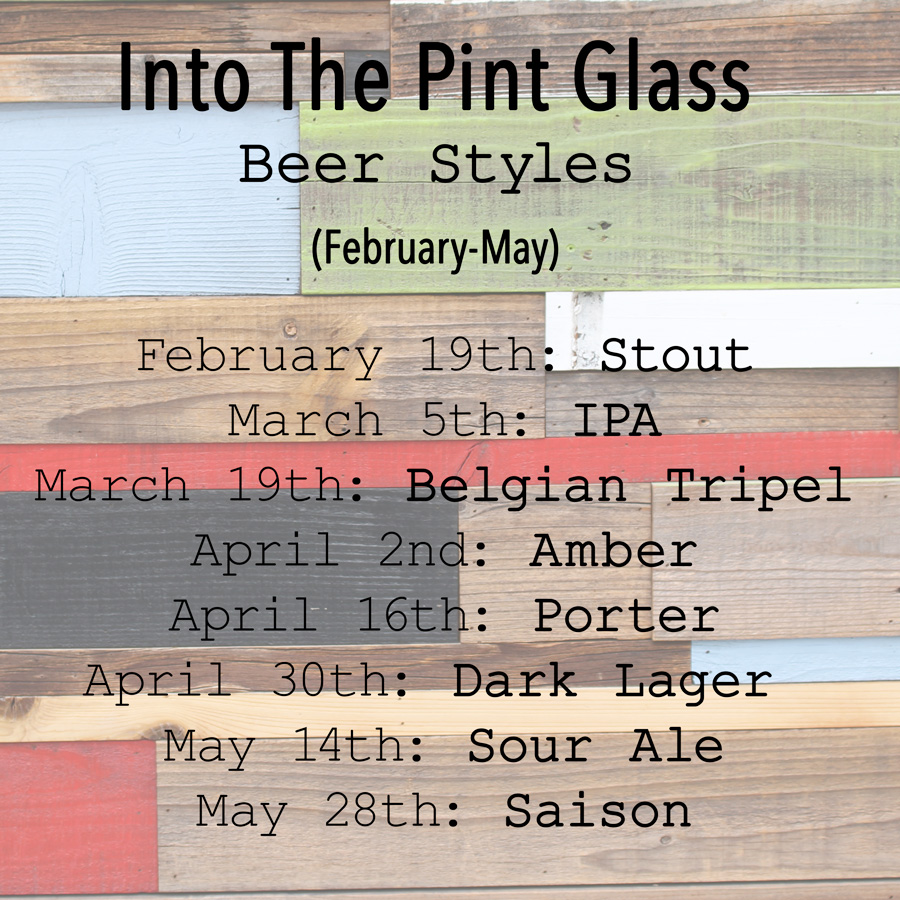