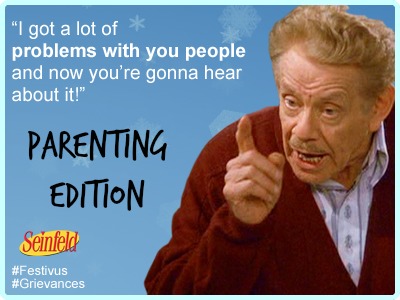 I have a lot of problems with you people, and I’m looking at you parents. Alternatively this also could have been titled “How Parents are Ruining My Dining/Drinking Experience” 🙂

Just because I do not have a child does not mean I can’t or won’t judge parents. It is not necessarily due to having a child or not having child, it’s called common sense/common decency.  Sure the card of “you don’t know what you will or won’t do until you have kids of your own” is often played, but that’s an easy bow out of bad behavior. I’m sorry, but your life does not and should not continue exactly how it was prior to you having a child, those days are behind you and you need to start making adjustments. Here are a few examples of some parenting behaviors I’ve witnessed lately and said umm no….

Alternately you could replace kid with a really drunk friend and I would feel the same…..

Well, that’s my airing of grievances for today. Anything you want to air?