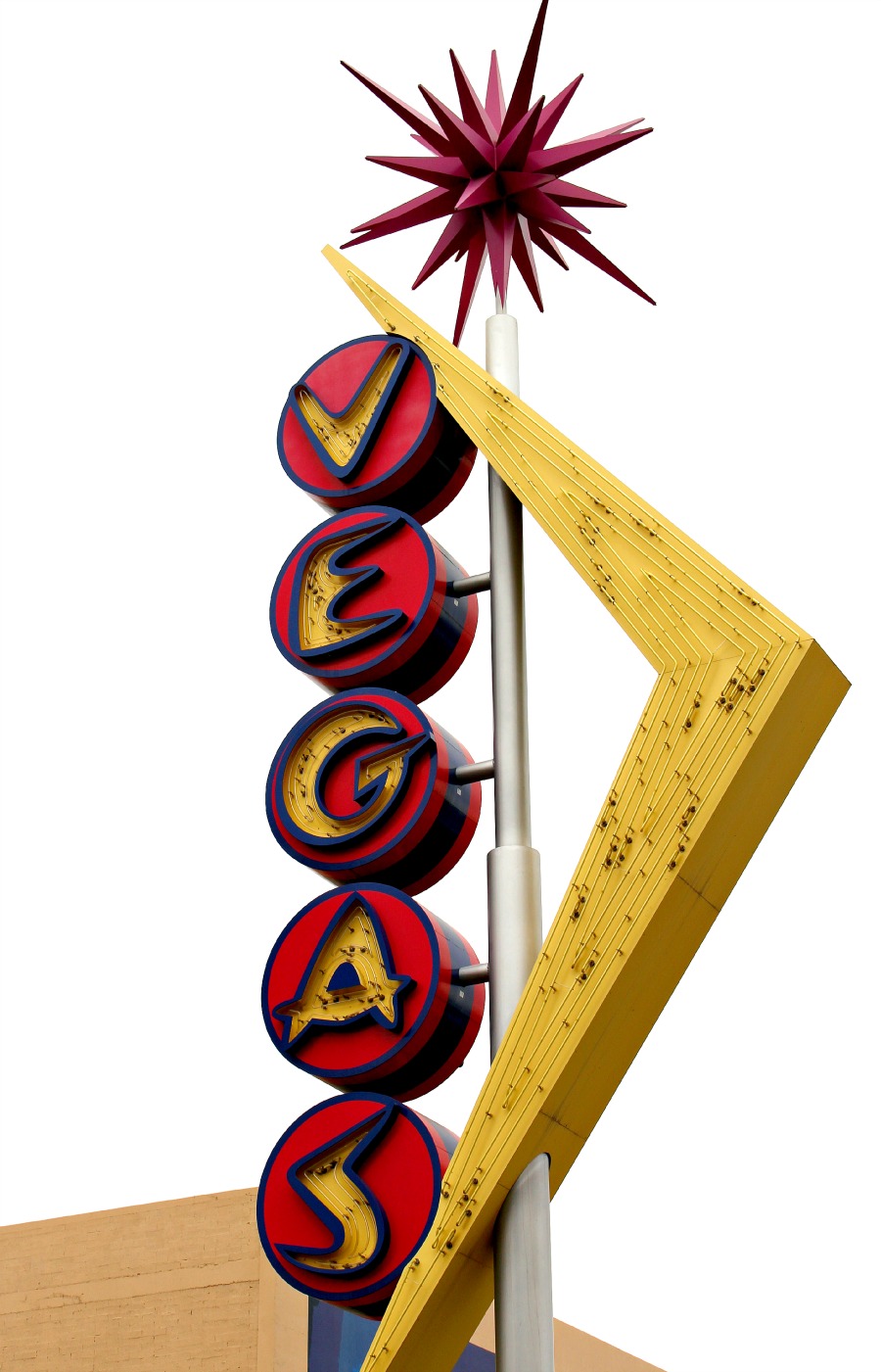 Vegas!! I feel like people are pretty polarized on the town. Many LOVE IT, for others it is usually described as an experience. I think we stand in the latter, it may be that it’s never been super high on my must visit list. It was certainly fun, the people were friendly, and there was plenty to do, but it’s a bit touristy for my taste. I think part of it was the food was just not that spectacular, maybe it just simply missed that authentic quality. I was amazed at the grand scale of everything, each casino was like it’s own little town. I’m glad we got to go, and we get to cross it off our list. How could we not take the opportunity when we could get there for CHEAP (our tickets were around $60 a piece round-trip), plus we got a great deal on the room too!

We stayed at the Venetian, it was really nice. The room was huge and very clean. I’m glad we stayed there, as opposed to Caesar’s Palace which was also on our list as a possible. The Venetian just seemed calmer and the casino floor was definitely less smoky compared to when we walked through Caesar’s Palace. We also liked the feel of the Cosmopolitan when we visited for dinner. This vacation was definitely a little more relaxed than other vacations we have taken, with us not go go the whole time. We gave ourselves a bit more down time than normal. I’m so glad we took the time to head downtown, it was really cool. I liked the feel of downtown more, less busy, than the strip. We took the bus downtown and it was very clean and easy…just make sure to get exact change and you can buy your ticket on the bus. I’ve split our trip into strip (or near strip) and those places more downtown. 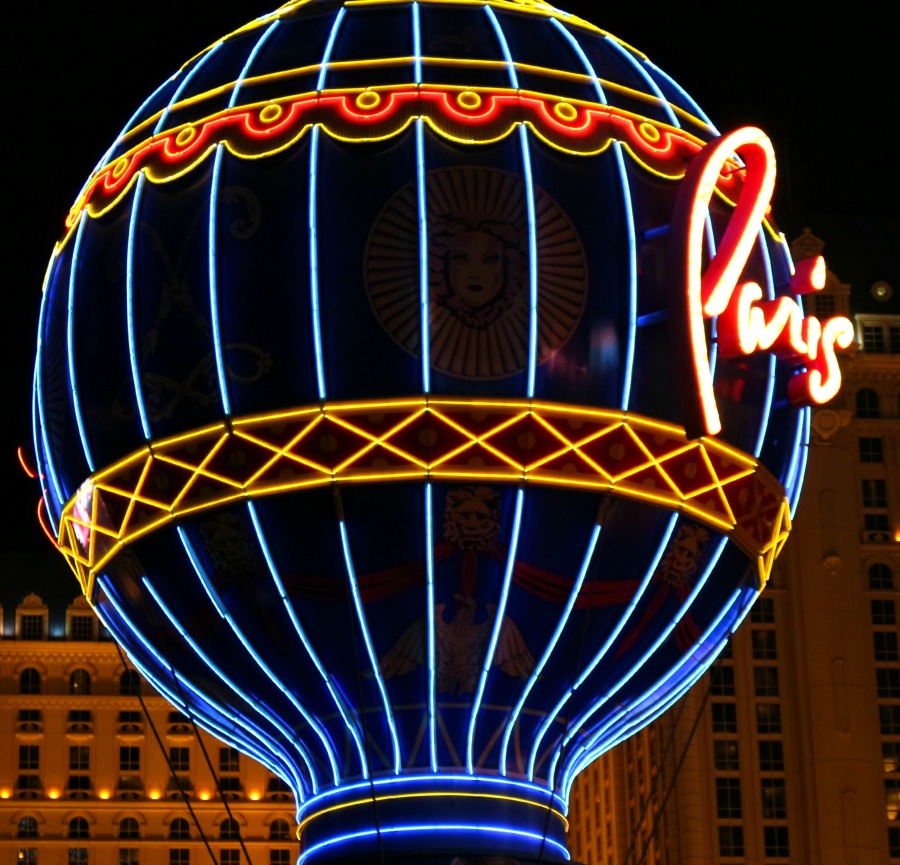 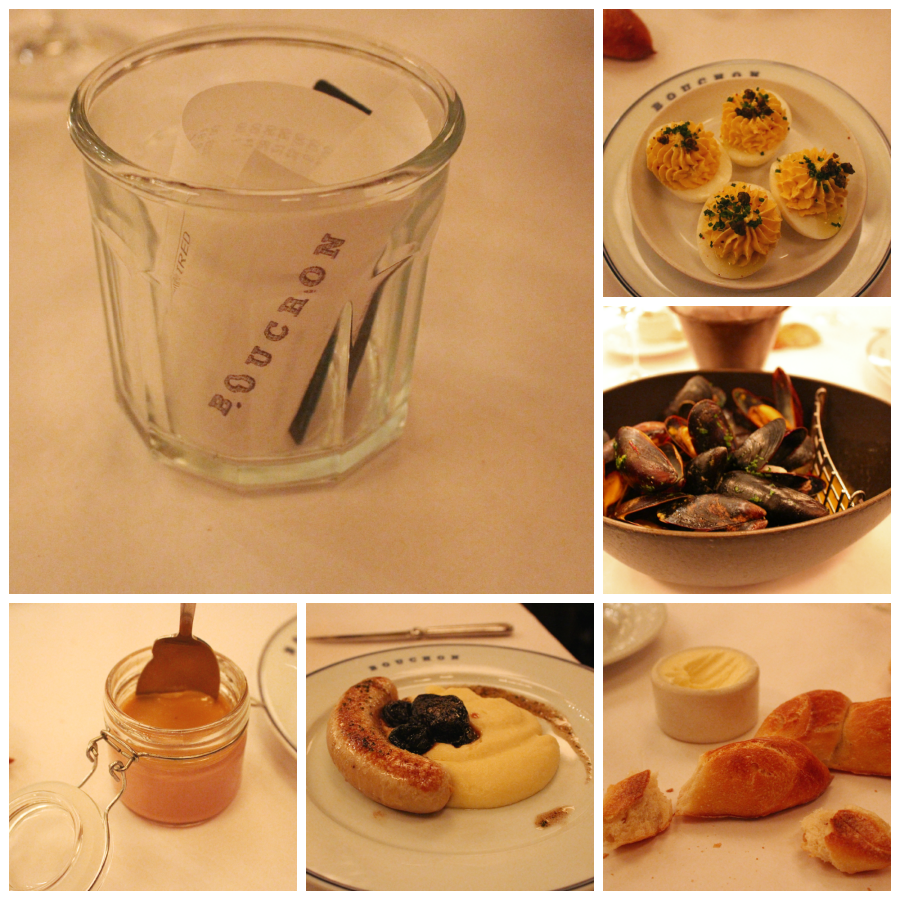 It was so good we ate here twice 🙂 We had planned on the dinner, because, well, it is Keller. We decided on the spur of the moment, to head here for breakfast on our last morning. I’m so glad we did too! While the dinner was good, but I enjoyed the breakfast more. The dishes were more unique. The pate at dinner was my favorite and of course I totally stuffed myself on that and barely had room for the mussels. The deviled eggs were good, but nothing exciting (I really have a problem when it comes to deviled eggs–I can’t resist). I loved my brunch dish of chicken and waffles and P’s croque-madame was exceptional. If I had to pick between breakfast or dinner, I would say go with the breakfast.  I also might have had something from the Bouchon Bakery shop everyday we were visiting too…just maybe 🙂 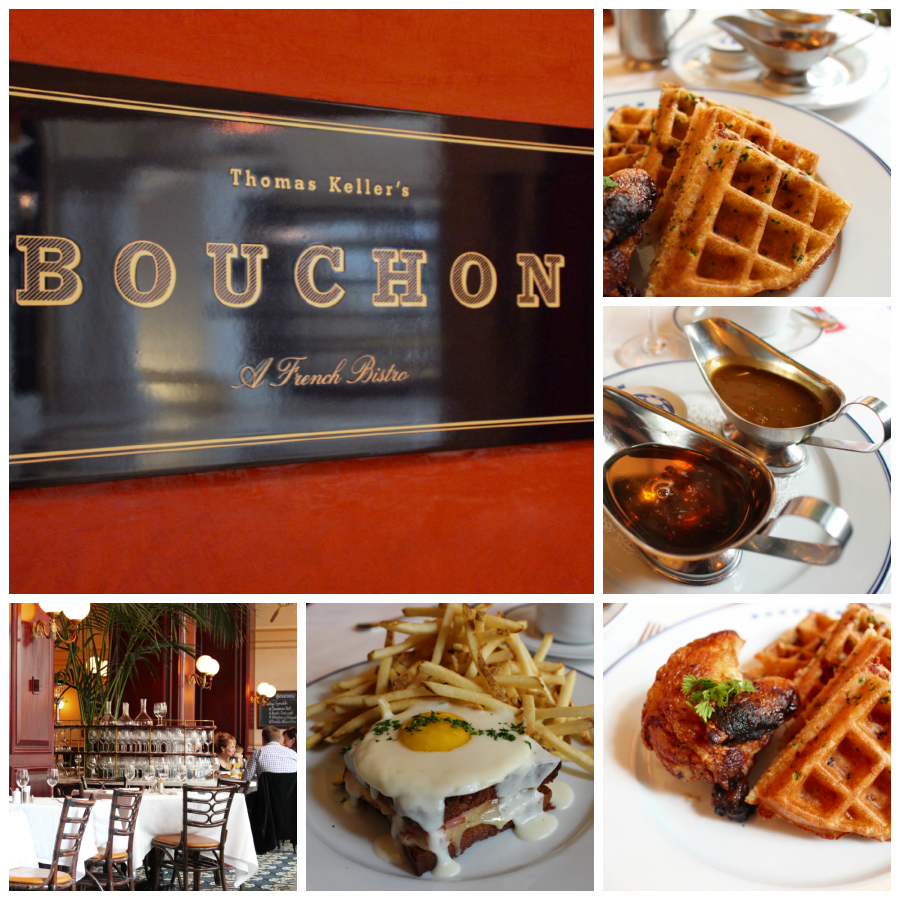 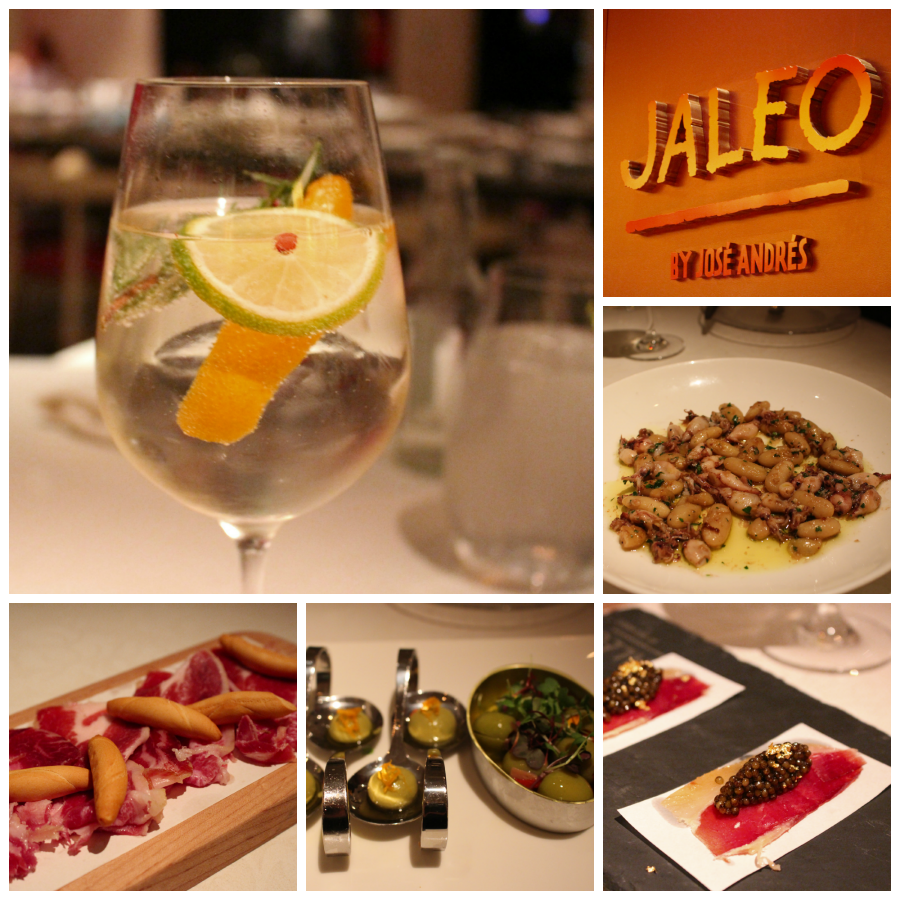 I had high hope for this one and it was good, but I wasn’t totally wowed. Part of it was what we ordered, so maybe it is amazing, but we ordered non amazing things. Let’s do the good first, the gin and tonics were wonderful!! Maybe one of the best I’ve ever had. The space was really cool too! So, my complaint was the one cooked dish we ordered was not that great. It was too oily and too garlicky. We ordered the Jose’s Taco, which is the dish on the lower right, with the gold…so not really a taco, more ham topped with caviar. It was good, but I actually found it not salty enough (I know makes no sense), it was very earthy. Not pictured was a course of cheese. One of my favorite dishes of the night was the olives, the ones on the spoon held liquid inside so they sort of dissolved when you ate them, now those were salty 🙂 An enjoyable experience, but certainly not a rave worthy experience. 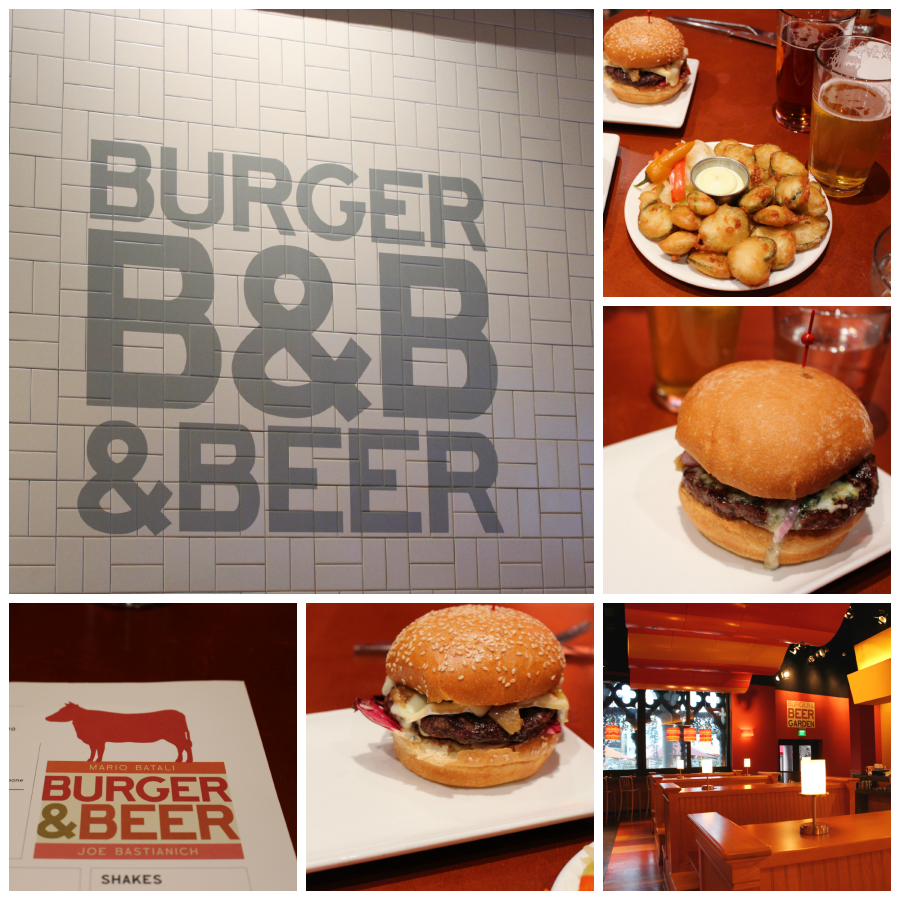 For a place named burger and beer, both were a bit disappointing. Their beer list was not as extensive as I would hope given the name. The burgers were very good, but the fried pickles were terrible. Way too oily and too much breading. My favorite part of the whole meal was the pickled cauliflower.

We decided to head out there on our “rainy” day in Vegas. The food was good, but limited beer choice. The service was terrible…and it was not busy at all. We didn’t see our waitress after we placed our order, not even for our check. We might have tried another beer, but didn’t really get the chance to order another one. Not overly impressed with the experience, but the sausage was tasty.

Sin City Brewing
We went to the one in our hotel at the Venetian. It was literally just a bar (stools & counter) tucked into the corner of a hall in the Venetian. The beers were ok, I wish they had a bit larger selection. All the red, hurt my eyes.

O – Cirque du Soleil (Bellagio Hotel)
LOVED this show! I’m so glad that we went, and it was worth the ticket price. It was so fascinating, the stage and the performers were unbelievable. I now understand why people go to the same show more than once, there is so much to see on the stage all happening at once. Just an amazing show!! We went to to the late show too, and I was so captivated I didn’t even think about being tired 🙂 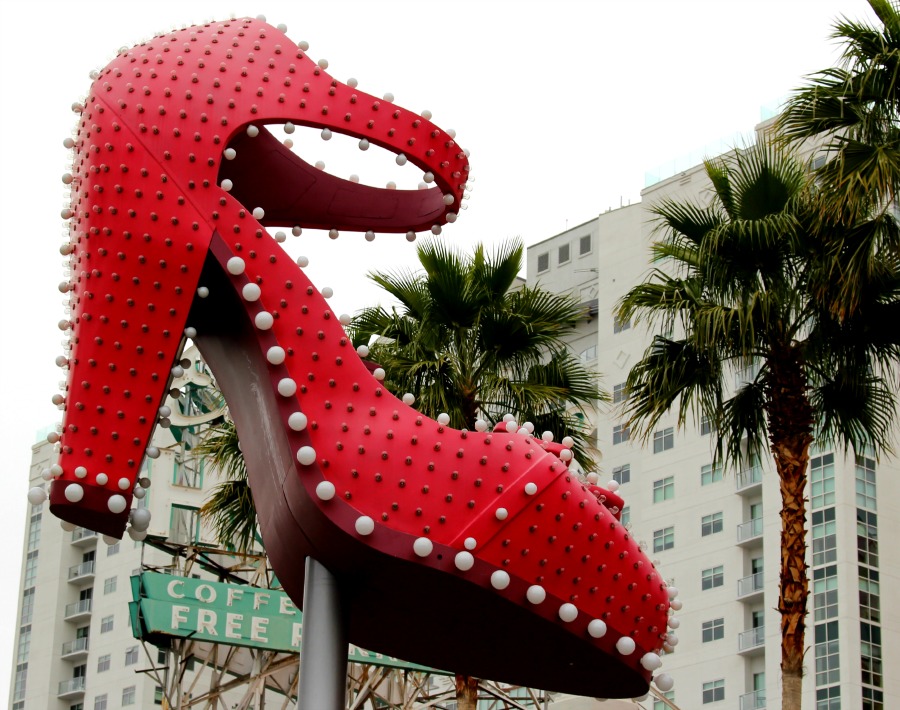 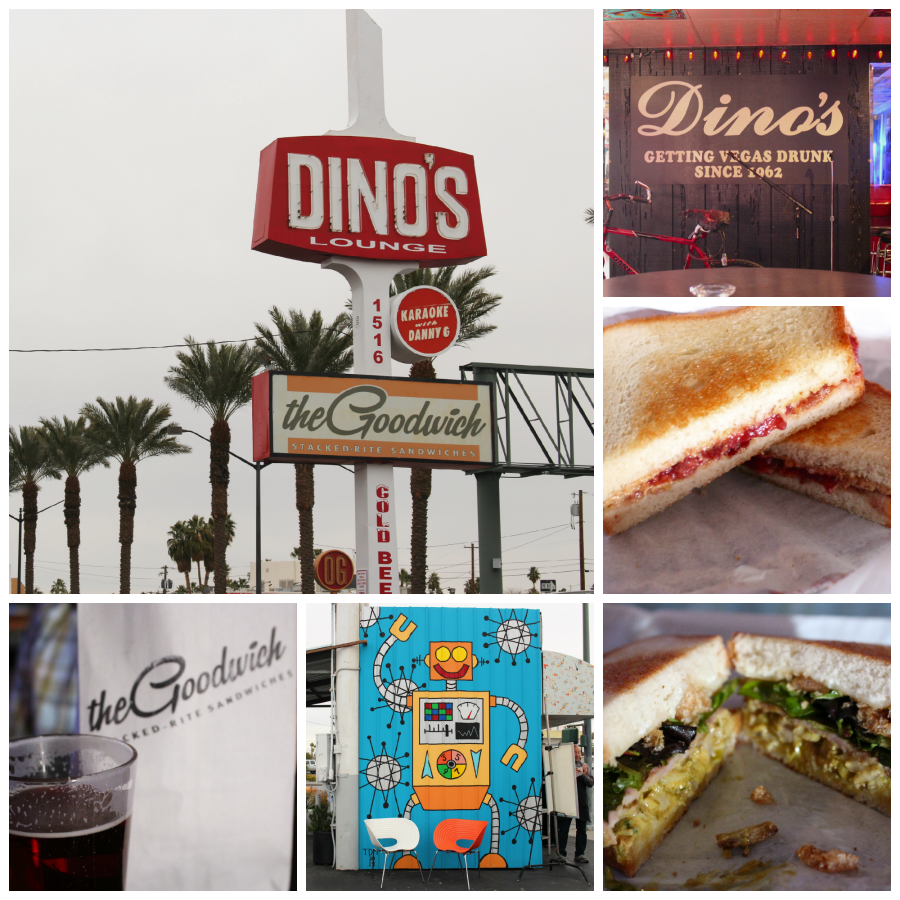 This was one of our off the beaten path finds, and boy was it good and unique. Goodwich is just a little sandwich stand in the parking lot of Dino’s. You can take your sandwich over to Dino’s and order a beer to go with it. Now Dino’s would certainly fall into the dive bar category, but they were as welcoming as can be. It almost felt like visiting with someone’s bartending grandmother, along with their drunk uncles and the younger son who never left home. It was a hoot!! I highly recommend it. The sandwiches were really good too!! Some firemen lined up behind us so it is certainly a local spot. We caught the bus here, and got back on to continue to downtown.

Not a huge fan of this one. The place was nice and bartenders friendly, but the beer was not good. They have some major refining of recipes to work on.

Triple 7
Really, impressed with their beers. Great service here too, they gave us one extra sample so we had a taste of all of their standard beers 🙂 This is more of a brewpub, with heavy emphasis on the pub. They had one of the most diverse and big menu’s I’ve seen in a while, including sushi. We didn’t sample any of the food. 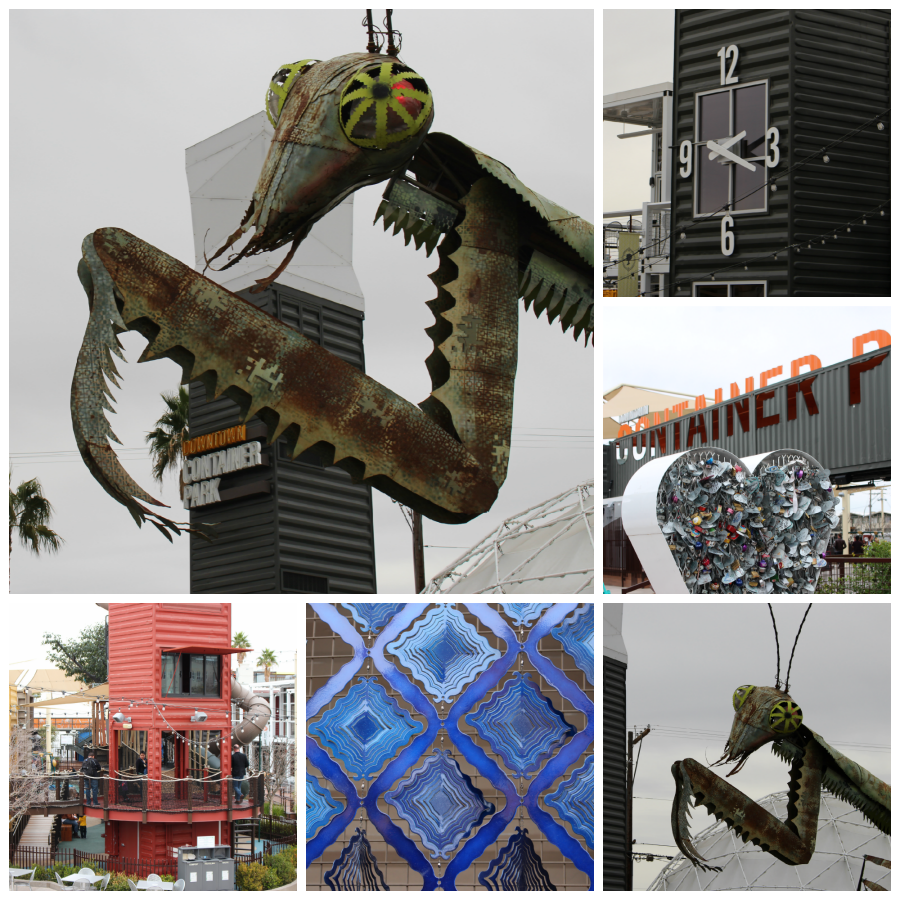 I’m glad we made it down to this area, so cool!! We walked around the shops, bought some chocolates and popped in for a hotdog. What a cool area!! The praying mantis that greets you in the front is HUGE. The hotdog from Cheffini’s was tasty and such a cute space. There were several other restaurants to choose from in the park too. We were not even hungry, but couldn’t pass up the interesting flavors.

For many, many, more Vegas adventures check out Esther & Jacob’s blog, they lived in Vegas for a whole year!! Also, check out Kristin’s adventures in Vegas on her blog No Reservations.

Have you been to Vegas? What did you think?